The cigar box guitar (or CBG) is probably the most commonly known roots instrument, and was the original inspiration for the formation of Salvage Sounds. Thanks to the work of Shane Speal and the Cigar Box Nation movement, more and more people are coming to know of these amazing instruments, full of character and stories to tell. 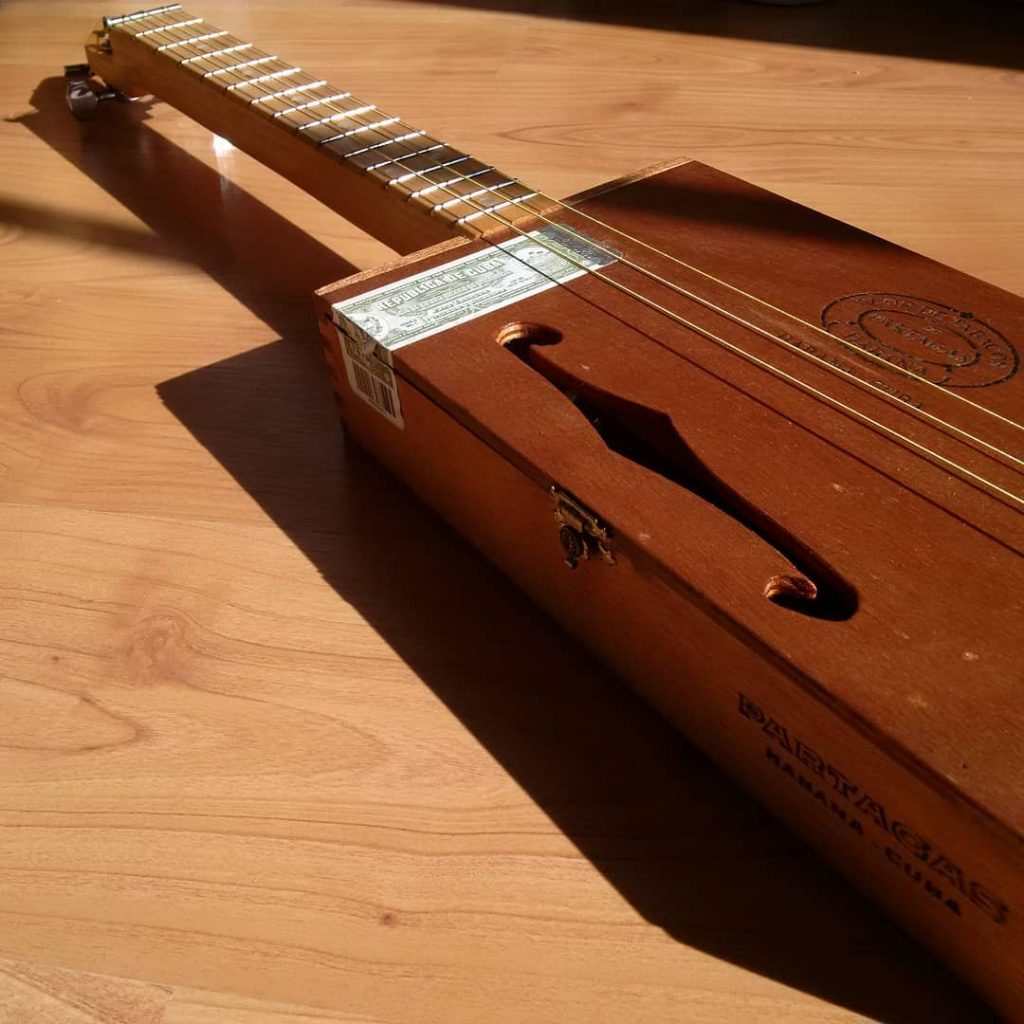 On principle we do not buy empty boxes for the specific purpose just to build a cigar box guitar. As with other of our instruments, we rely on the kind donations of a network of salvage supply associates who have enjoyed the items concerned in their original form. As such, all of our cigar box guitars are produced in highly limited edition runs, and thus once they are gone they are gone… until the next salvage haul!  When you buy a Salvage Sounds cigar box guitar, you know you are getting, not only a rare and unique instrument, but also one built from a genuinely salvaged, high quality Cuban cigar box. In fact, all the cigar box guitars that we currently have left in stock started life as the vessels for premium cigars purchased directly in the country Cuba itself.  Not first imported for retail in the UK or elsewhere.

We have two cigar box guitar models: The classic “f-hole” with its ornate and instantly recognisable sound-hole shape. And an alternative design built using beautifully intricate paper-covered boxes, with dual metal sound-hole covers (that you may recognise as being a pair of sink strainers!) 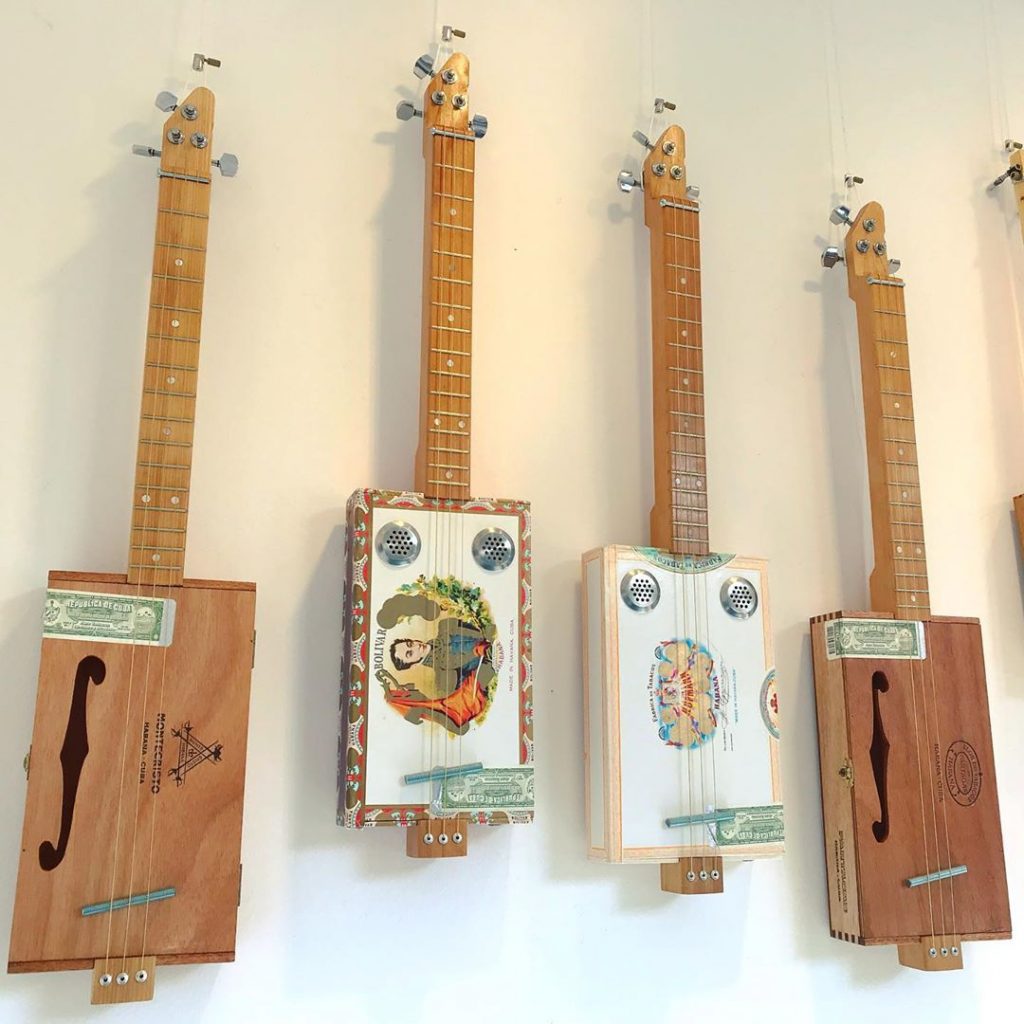 As we only deal with larger size cigar boxes that fit a minimum of 50 cigars (and not the smaller 25-cigar size you often see elsewhere in the cigar box guitar market), our CBGs are guaranteed to have a warm, full-bodied acoustic sound that is pleasing to the ear. However, as all our cigar box guitars are fitted with controllable preamps, they can be plugged in and played as electric guitars as well. In a clever twist to the design that we have not seen used elsewhere (yet!), we fit the control panel discretely “hidden” to the rear of the cigar box guitar. This has the dual benefit of keeping the aesthetics clean from the front of the instrument as it is viewed by others or when displayed on the wall, while having the control system easily accessible to the player for adjustment. 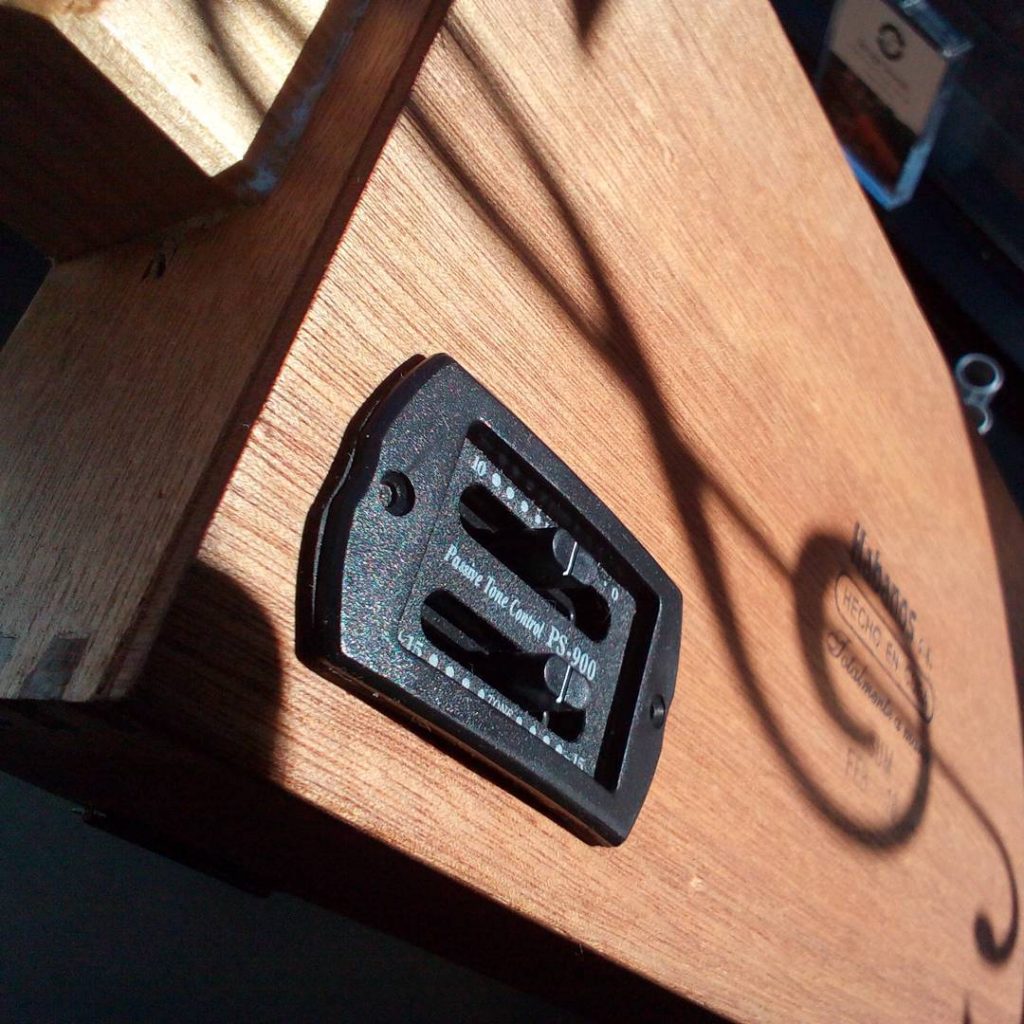 Another advantage of a Salvage Sounds cigar box guitar is the proportion of the instruments. The most common “scale length” of cigar box guitars elsewhere is 25 inches (this being the string length between the nut and the bridge upon which the fret spacing is based). Our cigar box guitars instead have a comfortable 22.5 inch scale length (inspired by the original Fender Duo-Sonic guitars of the 1950s).

What this means is that a player’s fingers can span more frets than on a longer scale instrument. This is specially important, though usually over-looked, on the cigar box guitar as these are typically 3-string instruments.  This means there are limitations to the amount of notes that can be played at once.  Having a long neck of around 25 inches or more only further exacerbates that restriction. Put more simply, our short-scale instruments offer the player a wider range of notes to involve in the playing of chords. There are some beautiful chords out there playable with only 3 strings, impossible to play on other cigar box guitars. 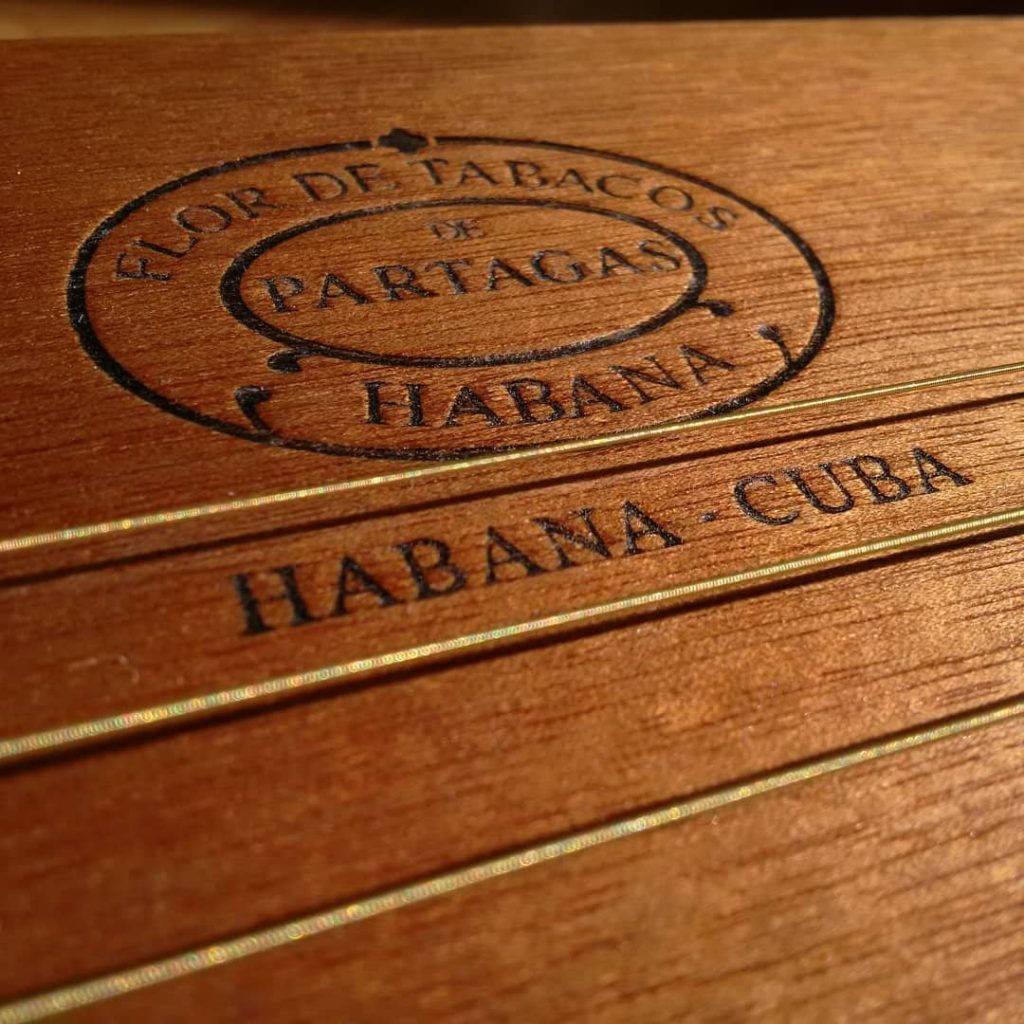 However, being tuned to an “Open G” cigar box guitar tuning, our instruments can be played with a finger.  Just 1 finger moved up and down the neck will give you every power chord and still sound fantastic. There is a wealth of learning resources out there for cigar box guitar based on this classic tuning.

The open G-D-G tuning also means the instrument is perfect for use with a bottleneck slide. We set the string “action” of our cigar box guitars to an optimal height, allowing for comfortable switching between styles.  Both slide and fretted-playing. We supply a hand cut bottleneck slide as a free bonus extra with every cigar box guitar. If you are really lucky you may receive one of our exclusive deluxe heavyweight guitar slides. As fashioned from a salvaged champagne or sparkling wine bottle.

Another advantage to being in this tuning is that the instruments work well in combination with in our other products developed of a similar musical key and configuration.  These are our 2-string fretless slide canjo and our pencil case strumstick.  There is much knowledge contained in our guides for each instrument that can be applied to a cigar box guitar.

As well as a complementary slide, another free bonus we include with every purchase is a quality guitar-hanger.  This will keep your instrument looking its best, displayed on the wall for all to see.  The signature Salvage Sounds headstock, closed-back tuners are other reasons to purchase one of our cigar box guitars. And as with all our products we provide our customers with lifetime support. So don’t hang around.  As suggested – we never quite know when we may next have stock available once the present batch is sold.